Water at the market, sampling the Cedar, the power of DNA

Water at the Winona Farmers Market
Shoppers get an eyeful

They may have come for cider doughnuts and melons but shoppers also took in squirming scuds and Mayflies during a hands-on water education event at the Winona Farmers Market. Members of the Will Dilg chapter of the Izaak Walton League of America (IWLA) and Save Our Stream (SOS) volunteers set up the display from buckets of stream water collected early that morning. The market ran from 7 a.m. until noon and critters kept up enough activity to keep everyone interested.

The goal was to give shoppers (and their children) an introduction to macro invertebrates as telling indicators of the state of our streams. From among the pond weed and leaf debris in the buckets, Ikes and SOS team members sorted out the different species into three different sets of ice cube trays. The trays represented degrees of pollution to illustrate the relation between species and their tolerance for poor, fair, and good water quality in regional streams. Hand lenses and identification pictures helped stoppers-by get a good look at, yes, scuds and mayflies, as well as aquatic worms, rifle beetles, lunged snails, a couple of dragonflies ready to hatch, loads of caddisflies, and other macro invertebrates.

There also were secchi tubes for observing water clarity and an information table with related handouts and stickers. The event helped the WFM honor National Farmers Markets Appreciation Week by shedding light on this oldest of partnerships between good food and good water.

For information on the SOS program, Click Here!  Local SOS volunteers live in Driftless region watersheds that drain to the Mississippi. In groups of two to five, stream teams monitor eight local stream sites using the national SOS program; data are entered into a national database as well as the federal Clean Water Exchange. Stream teams are part of the IWLA’s Upper Mississippi River Initiative (UMRI).

An indoor water education program is being planned by this same group for late fall. 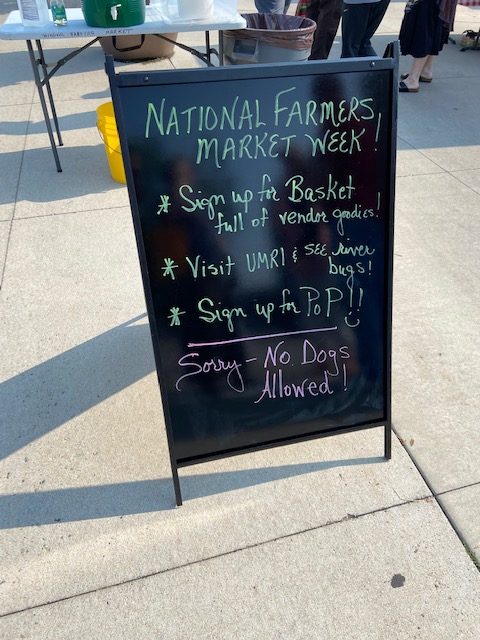 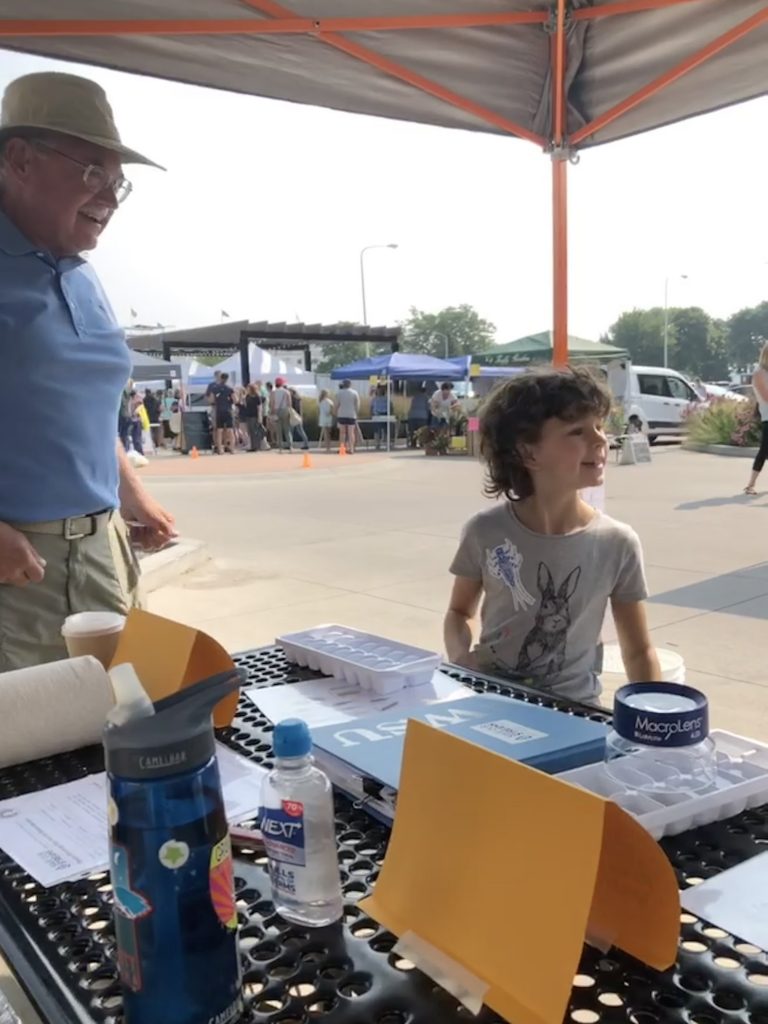 Who doesn’t like a sticker and one of a Mayfly no less! Winona Ikes member Mike Kennedy obliges a young visitor. Photo by Delicia Iremonger 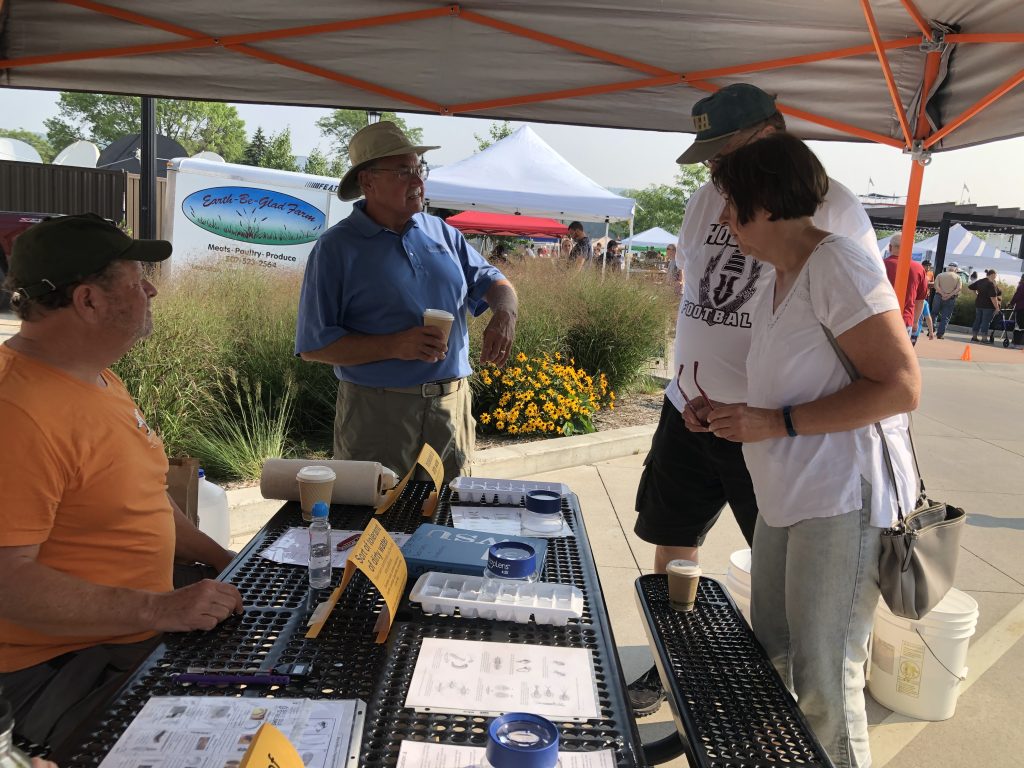 Participants of all ages stopped by the display, some to appreciate animated discussions about water and soil health, and in this case, a family farm slowly turning toward sustainable practices after two generations to the contrary. Photo by Delicia Iremonger 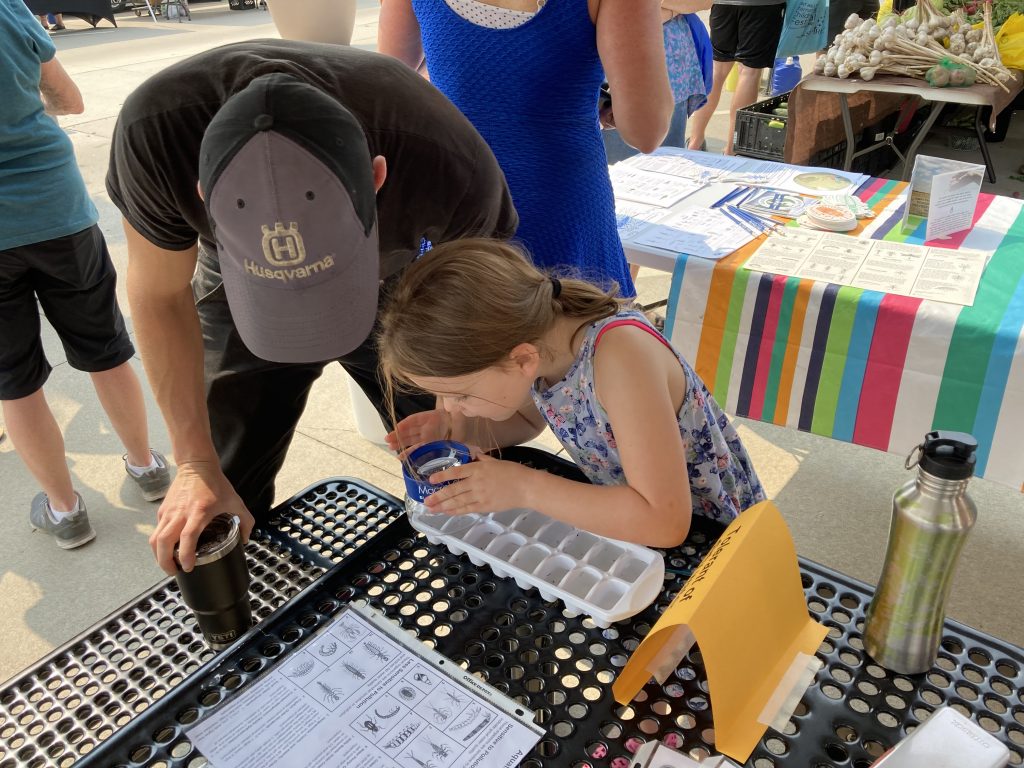 Hand lenses helped with the close up views of macro invertebrates divided by species and pollution tolerance into ice cube trays. It was clear that the hands-on accessibility of live species provided an alluring draw to shopping families, including this father and daughter. Photo by Caroline van Schaik 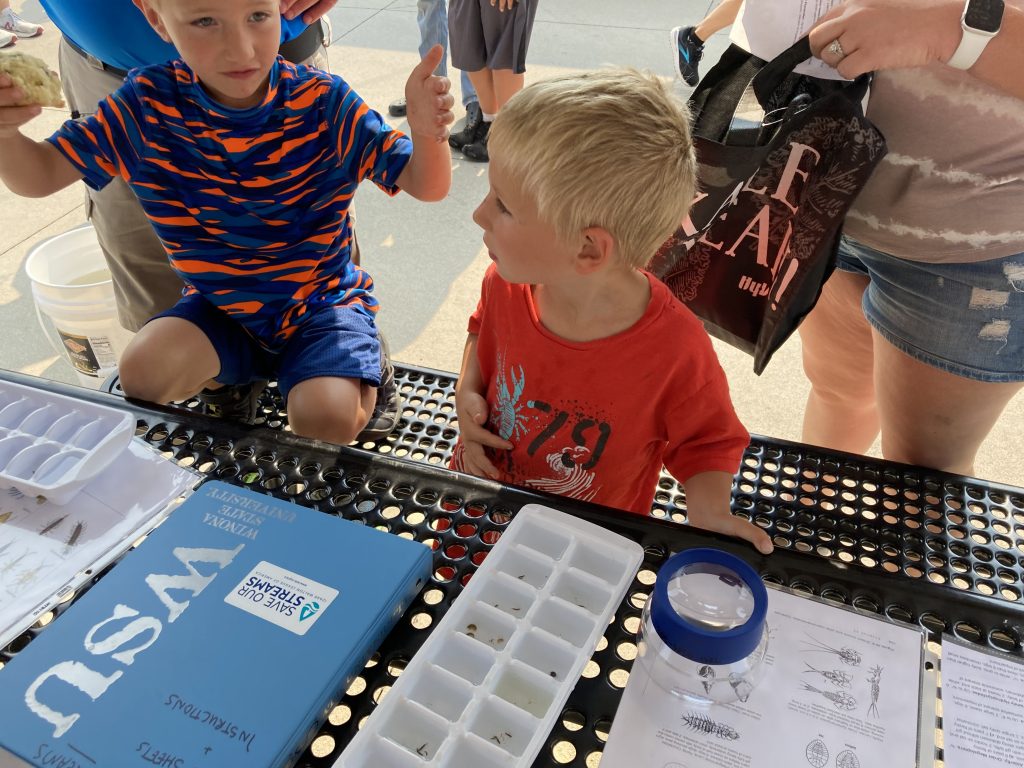 Young muffin eaters had their own big fish tales to tell before crouching close over the ice cube trays of macro invertebrates from local waters. Grownups, too, were drawn to the curious opportunity to peer close up at a Mayfly or rifle beetle. Photo by Caroline van Schaik 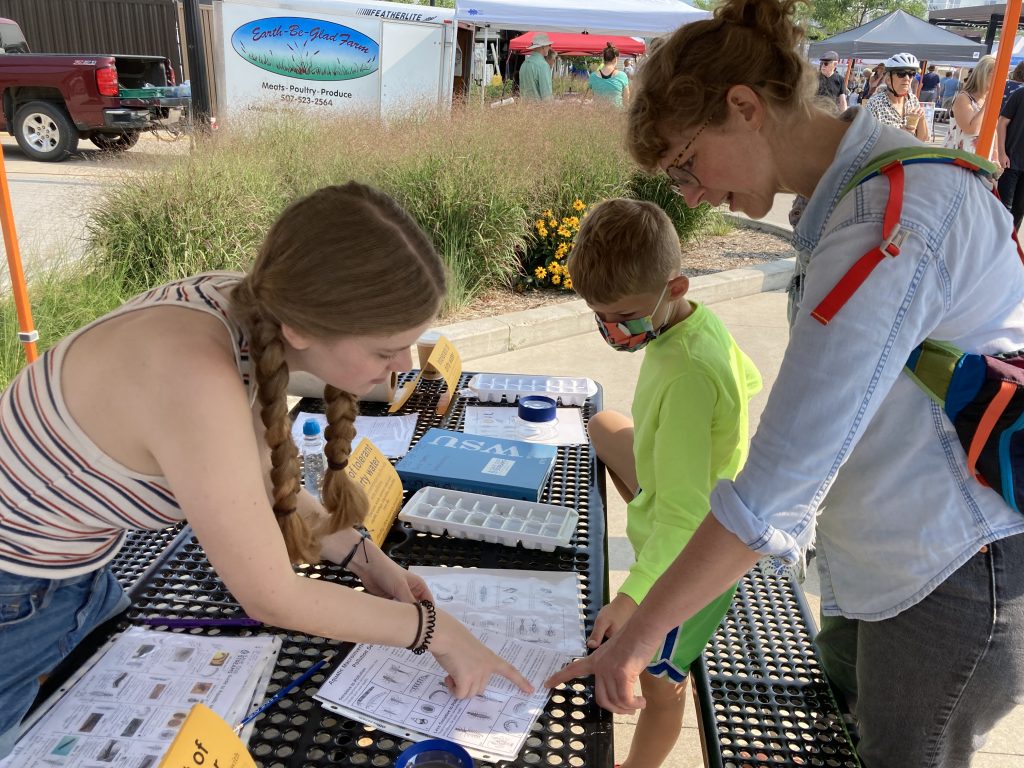 A budding stream biologist – 3 of them, perhaps! – used the identification sheets that the national SOS program provides all its volunteers. This mother and son contacted UMRI staff later and will join stream teams during stream monitoring in October/November. Photo by Caroline van Schaik 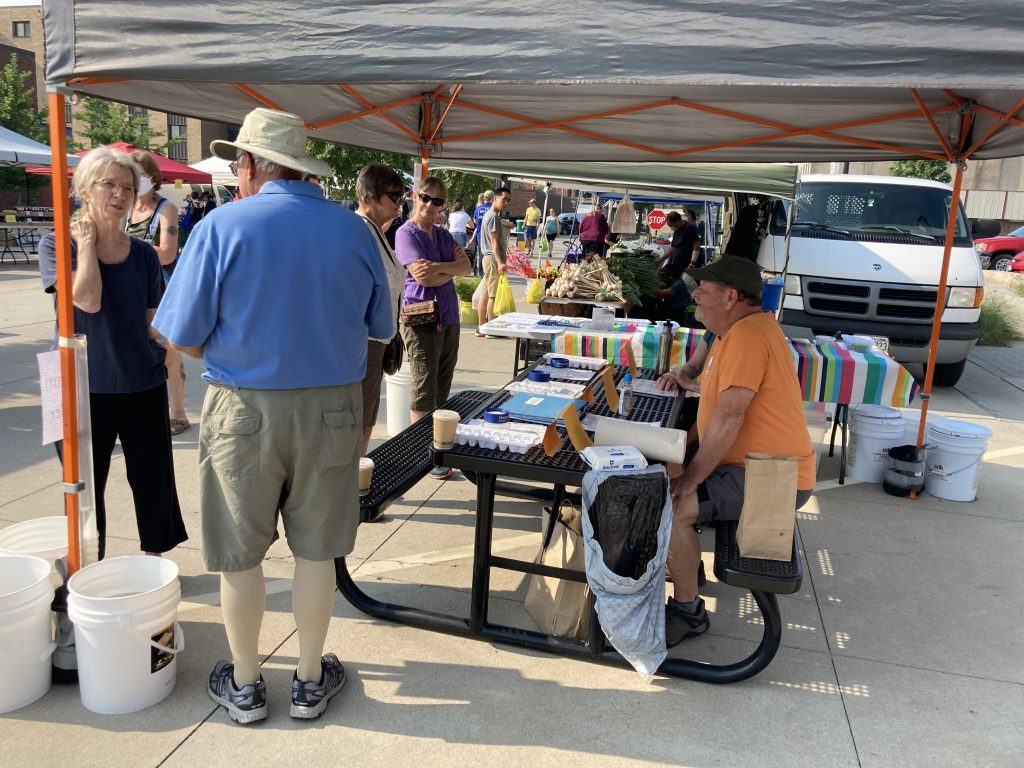 Water quality can be broached through a variety of lenses, making public outreach a tool in a myriad of settings, including a farmers market when people are relaxed and have time to be interested. Photo by Caroline van Schaik

Sampling Iowa’s Cedar River – the DNA of the E.coli question

The Cedar River that runs from southern Minnesota is under scrutiny by Iowa volunteers and resource staff keen to understand E. coli contamination on their side of the border. The project is based on ongoing work by the Austin, MN Ikes chapter to prioritize septic system upgrades given the findings that human feces is contaminating the Minnesota side of the Cedar. Chapter leaders in both states spearheaded the partnership that has now trained members of three teams taking weekly water samples in Iowa’s Linn, Black Hawk, and Floyd counties. Samples from the 20 sites are incubated for E. coli colonies; hot spots will be tagged for genetic analysis by a Florida lab to identify the specific source of the bacteria. The work is funded largely by an Endowment grant from the Izaak Walton League, with additional support from the Upper Mississippi River Initiative, the four Ikes chapters, and participating staff from Iowa Department of Natural Resources (Black Hawk County) and Soil and Water Conservation District (Floyd County). Sampling will continue into mid-October and is based on Austin, MN protocol and the national Save Our Streams program.  For more on this unfolding story, please see this month’s report from Iowa.