The data behind citizen sampling and fall monitoring, including fecal matter

Picking up this theme are Save Our Stream citizen scientists who are sampling our 8 sites in Minnesota’s Driftless region this month and next. It’s been a slow, mild fall, and so far, we’ve been able to dodge the weather that can make this just a little less fun. So far…!

It’s worth repeating last month’s lead in paragraph: Citizen science accomplishes much goodness for our world, including sound data added to the story of local water health. The Driftless region in southeast Minnesota hosts 8 monitored stream sites under the auspices of the UMRI work. If the idea of monitoring streamside is enticing, please contact Caroline van Schaik to inquire about joining us at a site or two.

In the meantime, two hours at our site behind the Visitors Center of Whitewater State Park illustrate several facets of this work. We found an improved situation from results of a year ago. Data over time help point out the otherwise often imperceptible changes, for better or for worse. Here are some images to tell more of this story, followed by a few scenes from Lanesboro and New Hartford sites this fall. 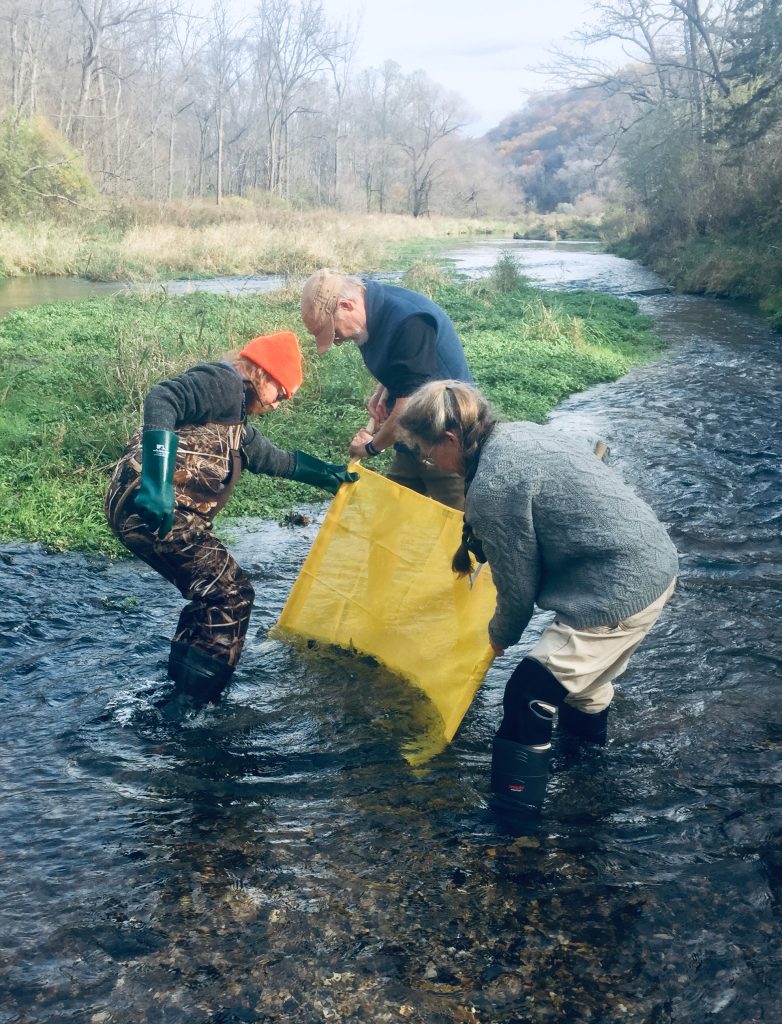 The use of a kick net and some sturdy foot action followed by paint brushes and practice help SOS monitors take a count on macro invertebrates. Photo by John Weiss 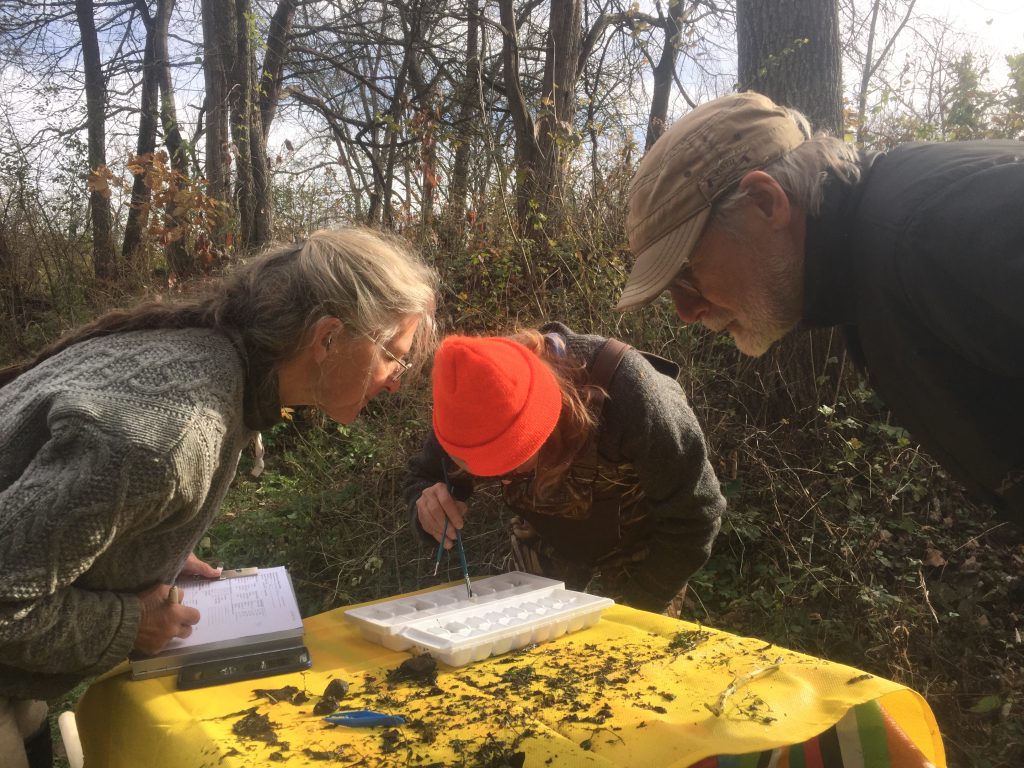 We do find that we “see” things now that we did not when we began in 2019. For example, abdominal gills are gratifying to recognize as they are an essential identifying feature. The number of tails, the presence and shape of legs, and which side a snail opens all give hints to novice viewers trying to get a sense of the health of surface water. Photo by John Weiss 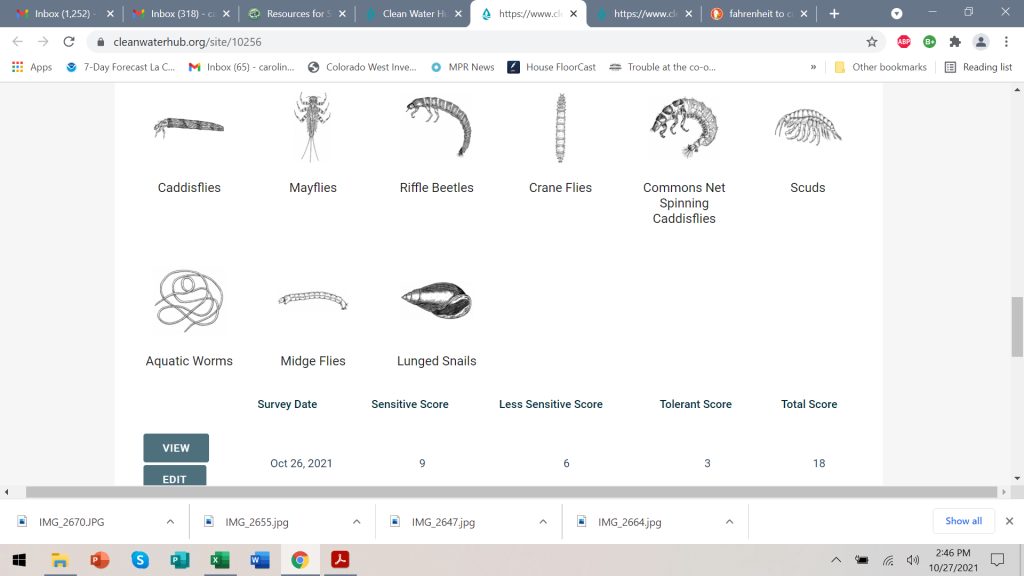 Once the kick net has been picked over to separate out and identify macro invertebrates, and the data is entered by a certified SOS volunteer, the national data base called The Hub (https://www.cleanwaterhub.org/) presents a visual of the species named. 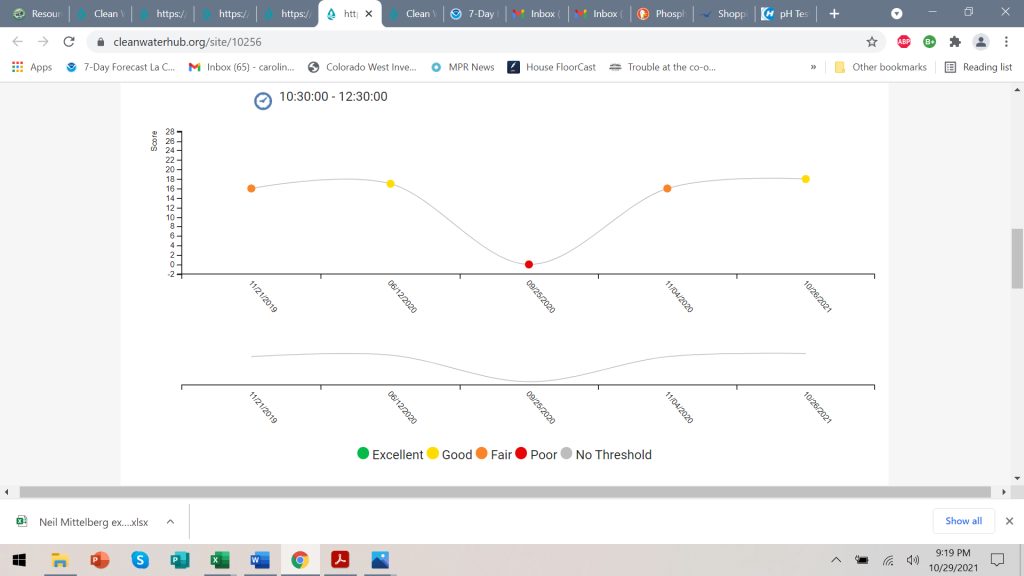 The national data base also calculates a score of the state of macro invertebrates based on the number of species found in each of 3 categories related to pollution tolerance. The higher scores go to identified species that require cleaner water. Best of all is a large diversity of species, not simply lots of a few kinds. 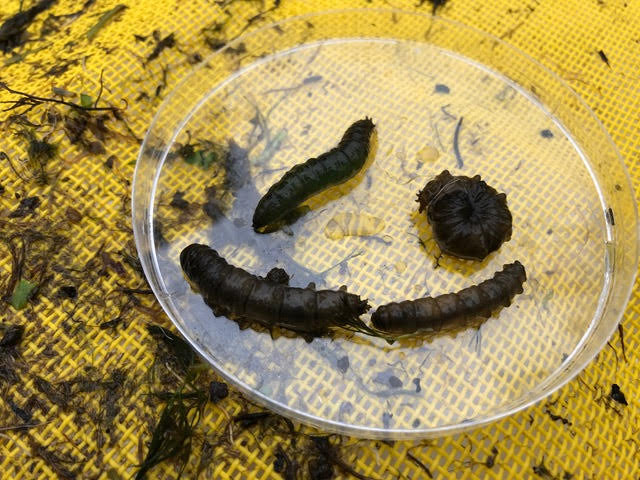 SOS monitors Dave Shaffer, Sheila Frost, and John Weiss were at Diamond and Gribben creeks near Lanesboro in October and found these juicy crane fly larvae. This species has a mixed tolerance of polluted water, making them a welcome addition to a diversity count and water quality indicator analysis. Photo by Dave Shaffer 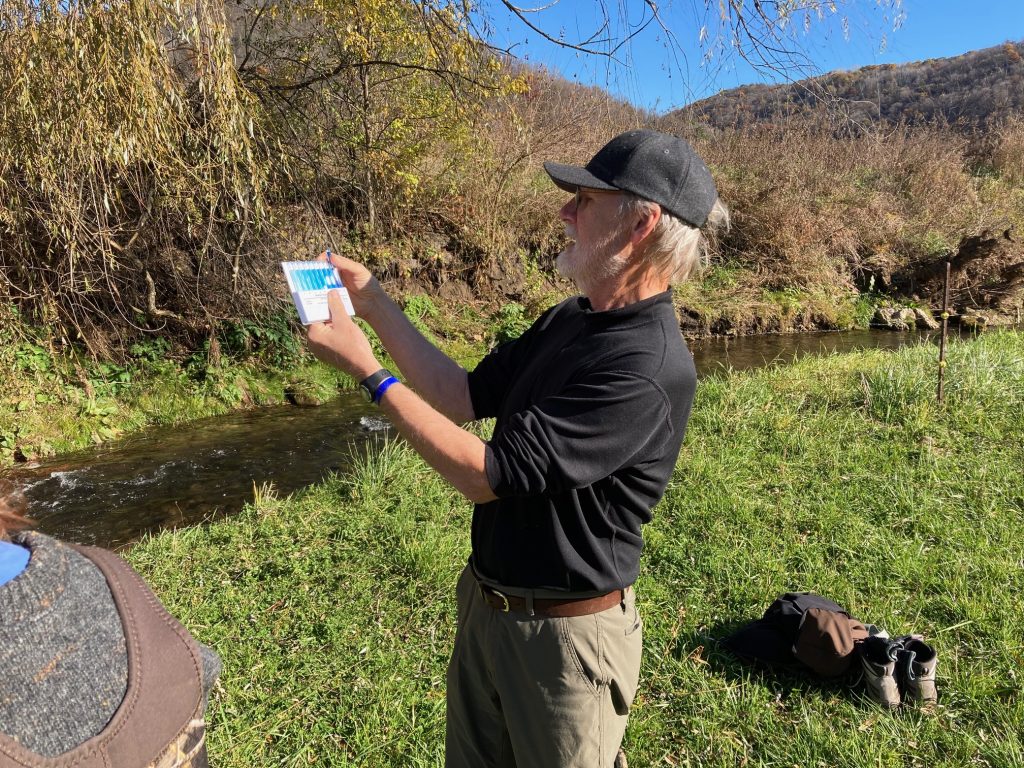 SOS monitor Robin Draves was along Pine Creek in late October, pictured here checking for phosphorous. Test strips, chemical reagents, sunlight, and a good eye are some of the tools that make the SOS sampling protocol as rigorous and telling as it is. That said, the methods are accessible to non-science enthusiasts and the test kits are readily available to anyone. The national SOS site has a resource page to lead the way (https://www.iwla.org/water/resources-for-monitors), though a word of caution is warranted – Covid supply issues are at play here as they are everywhere. Also, buying directly from the product maker (Hach or Chemetrics, for example) guarantees an optimum shelf life as opposed to receiving chemicals that are nearly out of date from a supplier such as Amazon.

The matter of fecal matter

Human fecal matter was found at two of the 20 sites of a summer-long project of stream sampling in the Cedar River Watershed in Iowa. The project, planned by the Austin, MN chapter in partnership with 3 Iowa county chapters of the Ikes, was stunted by a dry season. But diligence and some timely rains led to a sufficient flush of E. coli to warrant targeted genetic testing. The project is funded by a national Ikes Endowment Grant and is based on extensive sampling by the Austin chapter that led to ongoing tightening of septic ordinances. It was designed to help the Iowa chapters of this shared watershed identify not just high levels of E. coli bacteria but the specific source of it on a site by site basis. City and agency staff have water quality concerns about the Cedar River and this citizen science effort will help shape a response. For more information, please contact Dale Braun, Linn County Ikes.